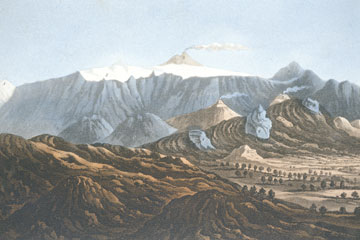 Charles Lyell got his first inkling of the scope of geological time when he visited the Auvergne region of France, motivated by Scrope’s recently-published book (see exhibit item 63). But Lyell had his own epiphany when he visited Etna in 1828. He had learned, while touring France, that the percentage of extinct fossil species in a rock was an indicator of the rock’s age. Thus a rock in which 50% of the fossils represented extinct species was of moderate age. When he saw Etna, he saw a mountain that appeared to be of immense age, sitting on hundreds of feet of lava and basalt. But when he found a limestone layer that ran beneath the mountain, he found that 95% of the fossils represented living species. In geological time, Etna was incredibly young, and yet in human terms, it appeared quite ancient. Lyell had discovered that human time and geological time were not even comparable. The earth was immensely old.