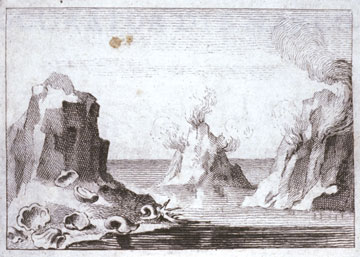 Moro was very impressed by the new volcanic island that had risen from the sea at Santorini in 1707. He was particularly struck by accounts that described how shells had been brought up from the bottom of the sea floor by the force of the eruption. It occurred to Moro that perhaps this was the source of all fossil-bearing beds, and he made this argument in this book, On Shells and other Marine Bodies which are Found on Mountains.

Moro also cited the example of Monte Nuovo, the new volcano of 1538 near Naples, as evidence that mountains and islands have a volcanic origin.

The engraved vignette on the title page shows a volcanic island, newly erupted and brimming with seashells.