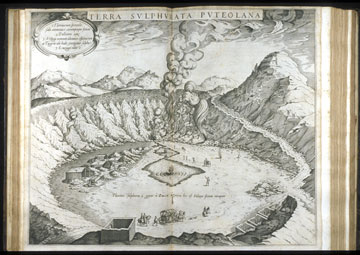 The best known feature of the Phlegraean Fields is the crater known as Solfatara. It was mined for its sulfur deposits, and its fumaroles were continually venting steam and smoke, making it a tourist attraction as well. It was first illustrated by Michele Mercati, director of the Vatican gardens, in the 1580s, when he was compiling his encyclopedia on minerals, the Metallotheca. Mercati died before the book could be published, and the manuscript and engravings languished until 1717, when they were rediscovered and published in lavish format. His dramatic engraving of Solfatara would later be copied as one of the eight mineralogical plates in Diderot’s Encyclopedié (see exhibit item 16)