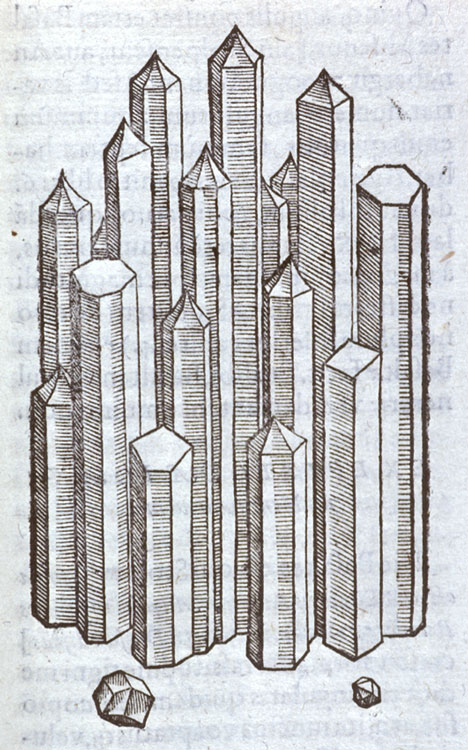 In a second article accompanying the engraving of Cole’s drawing of the Giant’s Causeway (see exhibit item 13), Thomas Molyneux called the causeway "as remarkable a natural curiosity of its sort as this country provides, and perhaps as may be met with in Europe." Interestingly, Molyneux considered the Causeway to be a Fossil, and he wondered what other fossils it resembled. Searching the literature, he learned that Johannes Kentmann had discovered some prismatic columns in Meissen (now Saxony) and had called them, after Agricola, Lapis basaltes. The fossil was illustrated in Gesner’s book on fossils in 1565, and it is the first printed image of columnar basalt. Molyneux did well to find it.

The Gesner/Kentmann woodcut of basalt has been reproduced several times by modern scholars, but it is not generally realized that the image also appeared in Anselm de Boodt’s Gemmarum et lapidum historia (Hanover, 1609), which was a widely-used resource in the seventeenth and eighteenth centuries.