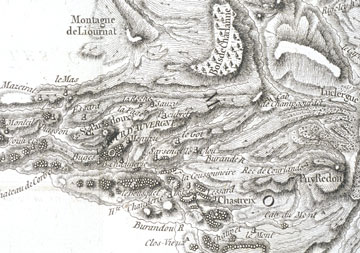 Nicolas Desmarest was the first person to connect basalt and volcanoes. He visited the Auvergne region of central France in 1763 and noted columnar basalt, similar to that of the Giant’s Causeway, near what appeared to be extinct volcanic cones. In 1768 he wrote captions for two plates in the Encyclopedie that showed columnar basalt in Auvergne, and he suggested there their volcanic origin. Then in 1771 he read an extensive paper to the Royal Academy of Sciences in Paris, to which he appended a geologic map of Auvergne. The map shows numerous columnar basalt formations which seem to be associated with extinct volcanic cones. Desmarest argued that all basalt was volcanic in origin.

The detail of the large map shows the region around the Tour d’Auvergne, with all the columnar basalt formations clearly indicated, as well as their origin from the volcanic Puy at the right. The basalt of the Tour d’Auvergne is also depicted in a view in the Encyclopedié, which we have used as the illustration to the introduction to this section (The Auvergne Connection).