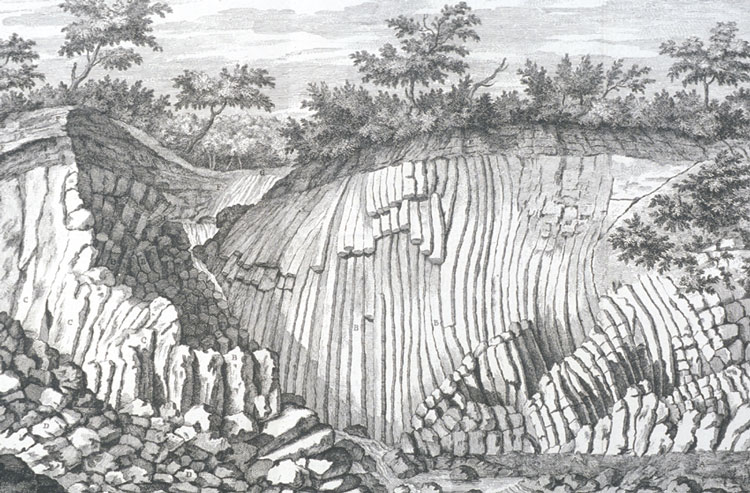 Alberto Fortis was a disciple of Giovanni Arduino, who had been the first to notice the evidence of volcanism in the Veneto. Fortis explored the area thoroughly in the 1760s, and he even accompanied Nicolas Desmarest when he toured the area in 1766 and noticed the basalt formations in the Ronca valley and the Alpone valley, between Verona and Vicenza. But it was not until 1778, when he was trying to obtain the professorship at Padua made vacant by the death of Arduino’s, that Fortis published this rather lavish book on the geology of area around Verona.

Fortis had no doubt the the basalt of the Veneto was the result of volcanic activity. But he also found abundant layers of marine sandstone and clay above and below the basalt. Fortis came to believe that basalt originated as marine clay and was transformed into basalt by volcanic activity. There were no fossils in the basalt because the fossils had been burned out by the volcanic fire.

Thus in a way Fortis believed in the volcanic origin of basalt, because he thought it owed its origin to heat, but in another way he rejected the theory, since he did not think that basalt was volcanic lava that had cooled very slowly.