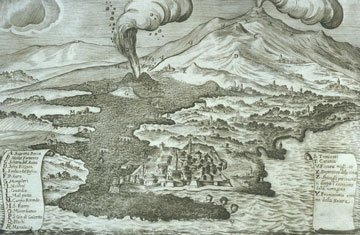 The eruption of Mt. Etna in 1669 was the greatest in historic times. A vent opened partway down the mountain, and an enormous amount of lava streamed to the sea, partially engulfing the town of Catania. Borelli did not see the eruption, but when he was asked by the Royal Society of London to investigate, he produced this treatise. He took issue with Kircher’s notion that there were vast caverns of lava beneath the earth’s surface, for which volcanoes were a safety valve. Borelli thought instead that local combusion inside the mountain caused rocks and sand to melt, and this vitrified rock erupted as lava.

The plate shows the summit of Etna at the right (marked with the letter "A), and the new vent of 1669 at left of center (labeled "1669 Nova Vorage"). The labels can be read more easily in the large version of the image. The city of Catania is at the bottom, nearly overrun by the lava flow.