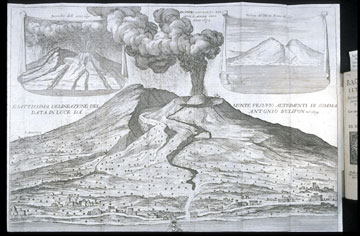 In addition to the eruption of Etna in 1669, the other great volcanic event of the seventeenth century was the eruption of Vesuvius in 1631. Vesuvius had always been slightly active, but the explosive eruption of 1631 was the most destructive since the one of 79 AD that destroyed Pompeii and Herculaneum. It was the first dramatic eruption of modern times, and many treatises and pamphlets were published on the event, marking the real birth of the literature of volcanology. The Library has a half-dozen of these treatises, but none are illustrated.

However, in 1694 Vesuvius erupted again, which prompted Antoine Bulifon to publish an account of the event, with a dramatic view of Vesuvius as a frontispiece. One nice feature of this illustration is that it also provides, at upper left and right, two inset views of the eruption of 1631. So we have here a visual record of two famous Vesuvius eruptions, in one engraving. A detail of the vignette at upper left may be seen in the introduction to this section (Vesuvius and Etna Awaken)