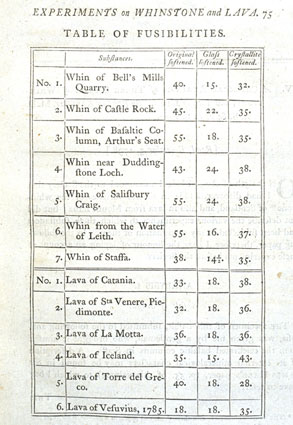 Hutton was trained as a chemist, but he did not think much of those who attempted to do geology in the laboratory, warning against those who "judge of the great operations of the mineral kingdom from having kindled a fire and looked into the bottom of a little crucible." His good friend (and chemist) James Hall respected Hutton’s wishes and did not pursue the matter while Hutton was alive. But after Hutton died, in 1797, Hall began an elegant set of experiments in which he obtained whinstone and lava specimens from various sites, melted them in crucibles, and showed that when cooled quickly they produced glass, but when cooled slowly they yielded a granular structure like basalt. He also showed that whinstone and lava were chemically identical.

The table shows the sources of his specimens: two of his whinstone pieces came from Staffa and Salisburg Crags, and one of his lava specimens was a chunk that he himself brought back from Vesuvius, when he visited it in 1785.