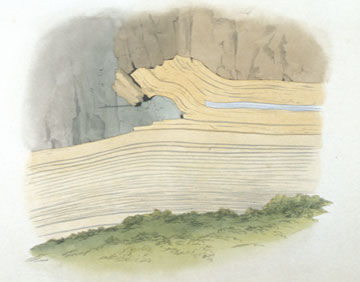 John MacCulloch was a Scottish geologist who came to believe, following Hutton and Hall, that whinstone was an igneous rock. One of the places he visited was Stirling Castle, and he found there evidence that would have delighted Hutton. There were many places where whinstone met limestone, and at such junctions the limestone was often displaced and bent, as if it had been melted when the whinstone was intruded.

In the colored lithograph that accompanied his paper, the limestone is the light-colored stratified rock at the bottom, and the whinstone lies above it; note the displaced piece of limestone. MacCulloch uses the term "trap," which is a synonym for whinstone (or basalt).