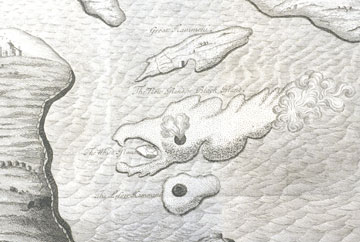 In May of 1707 the sea floor in the bay of the island of Santorini slowly rose to the surface, gradually creating a new island, which was covered with shells from the ocean bed. Then a series of explosive eruptions began in the bay, and over the course of the next four years another new island was created, this one volcanic.

Father Goree wrote this letter to the Royal Society of London describing the events, and attaching a map that showed the new islands. Goree attributed the eruption to a sulfur mine below the surface that had caught fire.