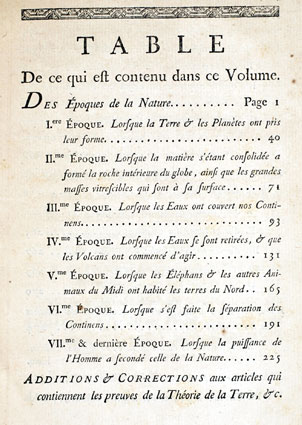 Nevertheless, Buffon played a vital role in our story, because he more than anyone made the idea of an ancient earth, if not an acceptable idea, then at least one worth talking about. In his Epochs of Nature, a supplement to his monumental Natural History, he proposed that the history of the earth could be divided into six distinct epochs, as the earth cooled from a molten mass (volcanoes first appeared in the fourth of these epochs). And he proposed a time-scale for these epochs of 75,000 years. Many were outraged by what seemed to be an attack on Biblical chronology. But others were not quite so shocked, and the age of the earth now seemed to be a topic for scientific discussion.