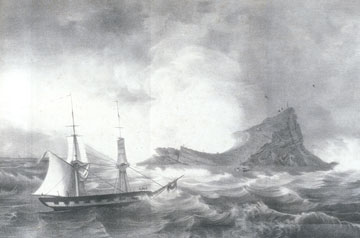 In 1831 the Mediterranean south of Sicily began to boil and bubble, and before long a volcanic island appeared, in full eruption. The British spotted it first, and named it Graham Island. The French were not far behind, and gave the island a separate christening, as l’ile Julia. The volcano continued to spew forth ash and cinders through the late summer and early fall. One of the French observers was Louis-Constant Prévost, and he used the occasion to argue against the so-called &#145craters-of-elevation’ theory that was then advocated by many geologists. That theory argued that most of the elevation of a volcano was caused by a swelling of the land beneath it. Prévost pointed out that there was no swelling beneath Julia; rather, the volcano had raised itself from the sea-floor by ejecting rocks and cinders.

Prevost’s plate of Julia in full ferment makes a dramatic closing illustration for our exhibit, and it also suggests that, when it comes to volcanoes, the earth is still full of surprises.