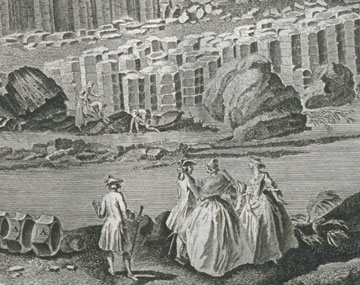 In 1740 an artist named Susanna Drury made two gouache drawings of the Giant’s Causeway, one viewed from the east and one from the west. Virtually nothing is known about Drury, but she did exceptionally well at capturing the appearance of the basalt formations. Engravings were made from her drawings in 1743/44 and were widely circulated throughout Europe. In 1765, volume 12 of the great French Encyclopédie was published, containing an article on the "Pave des geans," or Giants’ Causeway. Drury was not mentioned by name, but the author certainly had the engravings before him, as features are referred to by the numbers that appear as labels on the engravings of the Drury views.

In 1768 a volume of plates for the Encyclopédie was published that contained a section on mineralogy, and one of the eight plates is an unattributed copy of Drury’s "East Prospect." Two other plates show similar basalt formations in the Auvergne region of France. The captions for these plates, written by Nicolas Desmarest, explicitly suggest, for the very first time in print, that these basalt formations are volcanic in origin.