Hamilton, William (1755-1797). Letters concerning the northern coast of the county of Antrim. Containing a natural history of its basaltes ... In these letters is stated a plain and impartial view of the volcanic theory of the basaltes. London: Printed by G. Robinson and Co., 1786 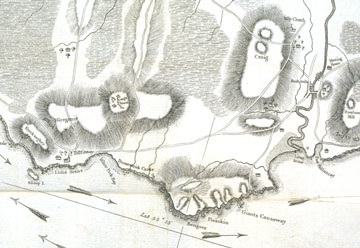 The author of this treatise was not Sir William Hamilton, the Vesuvius expert (see exhibit item 11), but the Reverend William Hamilton, an Irish cleric and magistrate. Hamilton provided the first really detailed description of the northern coast of Ireland, revealing that the Giant’s Causeway is merely a small piece of a very extensive basalt formation that runs along the entire coast. Hamilton was familiar with Desmarest’s argument that basalt was a volcanic rock, and as the title proclaims, he discusses the pros and cons of the volcanic hypothesis. However, it is clear that his own view is not impartial, and that he believes Desmarest’s explanation to be the correct one.

The map that appears as a frontispiece allows us to situate the Giant’s Causeway in its proper geographical setting. We reproduce a detail of the map for the catalog. Noting that North is down, we see the Giant’s Causeway labelled at bottom center right, and it can be seen that the basalt formations extend both east and west of the Causeway. In the map as exhibited, the basalt formations extend across the entire northeast coast of Ireland.