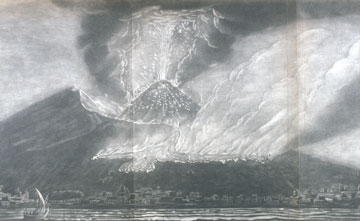 After awakening in 1631 and 1694, Vesuvius erupted numerous times in the eighteenth century, and many interested observers wrote accounts of these eruptions. The most valuable of these were written by Sir William Hamilton, British envoy to the court of Naples from 1764 to 1779. He saw an eruption the day of his arrival, climbed Vesuvius over 70 times, and sent accounts of eruptions as they occurred to the Royal Society of London, where they were published in the Philosophical Transactions.

One of the most dramatic eruptions observed by Hamilton began on Oct. 19, 1767. Hamilton sent two illustrations of the eruption to the Royal Society, showing the eruption as it appeared from the east (shown here), and as viewed from the Bay of Naples.

Hamilton later collected together a number of his letters on Vesuvius and published them as Observations on Mount Vesuvius, Mount Etna, and other volcanos (London, 1772). This work is not included in the exhibit, but we have used the map from the book to illustrate the introduction to this section, Vesuvuis and the Phlegraean Fields.