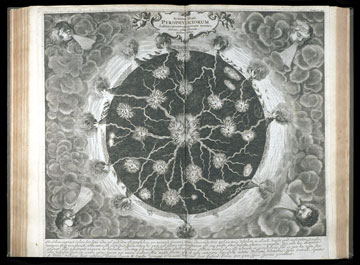 Kircher was a Jesuit polymath who witnessed an eruption of Mt. Etna in 1637, and subsequently looked down into the "sulfur and brimstone" of a boiling Vesuvius. He was so affected by his experiences that he eventually wrote this voluminous encyclopedia devoted to the subterranean earth. Kircher had a rather static view of the earth. He believed the earth was about 5600 years old. He thought God had created the earth more or less as we see it now. There was a fiery center, which was connected to various fire-filled chambers by numerous passages, and these chambers were eventually vented to the surface through volcanoes. When a volcano erupted, it was as a kind of safety valve, to keep the earth from being over-heated.

There are several striking illustrations in Kircher’s book that depict the imagined inner workings of Vesuvius and Etna (an engraving of Etna is used to illustrate the introduction to this section, Volcanoes and Scriptural Time.) But the most famous plate is this one, which shows the entire earth in cross-section, with a complex network of fiery channels and chambers that feeds the surface volcanoes.