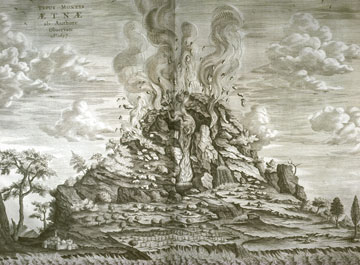 In 1650, when our exhibition begins, there was no such concept as "geological time". Historical geology had yet to be established as a discipline, and those who wondered aloud about the age of the earth did their wondering under the rubric of "chronology." Chronology was a sub-discipline of history, and chronologists worked with classical, Babylonian, and Egyptian calendars, and with Scripture. They did not yet work with rocks.

Volcanoes did receive the attention of those who studied rocks and collected minerals, but they were not thought to shed any light on earth history. Volcanic eruptions were spectacular but singular events, and before 1650, quite rare. They were not thought to play any role whatsoever in the shaping of the earth’s surface or the formation of rocks.

As for basalt, it had barely been recognized as a rock type, and no significant basalt formations anywhere in Europe had yet been identified by naturalists.