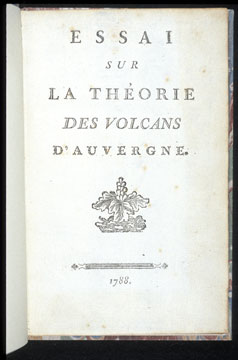 This little book on the Auvergne volcanoes is very scarce, and we decided to exhibit it because of its rarity, even though it has no illustrations. Reynaud de Montlosier was a farmer, politician, geologist, and resident of the Auvergne. He adopted the view of Desmarest that the region was formerly volcanic. He recognized that the volcanoes were of different ages: some fairly recent, with intact craters; some completely disappeared, leaving behind only basalt flows as evidence of their existence. He demonstrated that some lava flows had been extensively scoured away by water, before later flows covered them over.

Montlosier was very hospitable and welcomed all geological visitors to his turf. When Charles Lyell visited the region much later, he stayed with, and was enlightened by, Montlosier.