A series of plates representing the most extraordinary and interesting basaltic mountains, caverns and causeways, in the known world : Fifty engravings.
London: Published by the Proprietor [J. Manson], 1825. 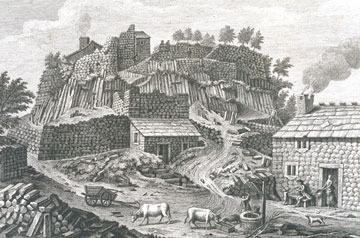 The plate displayed shows a view of Mezieres in the Velay region of France, where the basalt columns are so abundant that the local populace uses them for building stones.