Strange, John (1732-1799). "An Account of Two Giants Causeways, or Groups of prismatic basaltine Columns, and other curious vulcanic Concretions, in the Venetian State in Italy; with some Remarks on the Characters of these and other similar Bodies, and on the physical Geography of the Countries in which they are found". Philosophical Transactions of the Royal Society of London, 1775, 65:3-47 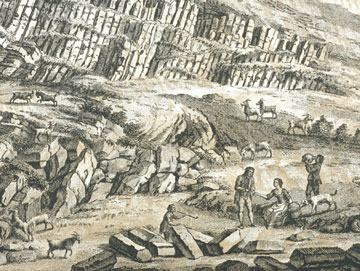 John Strange became English Consul to Venice in 1774, and following the lead of Sir William Hamilton in Naples (see exhibit item 11), he investigated the geology of the Veneto, and he was surprised to discover columnar basalt formations as impressive as those of the Giant’s Causeway.. He published two papers, with engravings, in the Philosophical Transactions of the Royal Society in 1775, of which this is the first. The first of the two engravings is displayed here, and shows a formation on Monte Rosso, in the Euganean hills south of Padua; the other plate depicts similar formations north-west of Vicenza.

Strange did not doubt that this basalt was of igneous origin, but he was puzzled as to why it occurred here in vast horizontal beds, and why there were no volcanoes in evidence. He concluded that some other factor was at work, and that volcanoes were hardly adequate to explain "the production of a Giant’s Causeway, or the basaltine organisations of Auvergne and Velay."