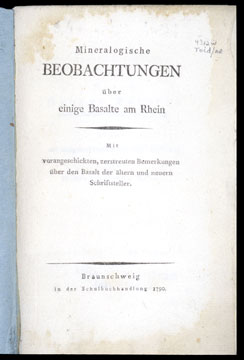 Alexander von Humboldt would achieve world-wide fame when he published his account of his explorations of South America from 1799 and 1804 (see exhibit item 40), but when he wrote this book, his first, he was still a student at Göttingen. He had accompanied Georg Forster on an excursion down the Rhine, and he had encountered the basalt formations at Unkel and Oberwinter. Humboldt was a follower of Abraham Werner’s ideas on the aqueous origin of rocks, and in this book he attacked the idea that the Rhine basalts had a volcanic origin. He would later change his mind, when he encountered similar basalt formations near volcanoes in Mexico and Peru.

The book is very scarce and for that reason we have included it in the exhibition, even though it has no illustrations.