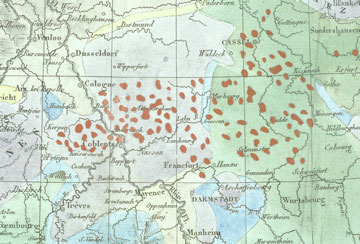 Omalius d’Halloy’s map was not the first geological map of France, but it was one of the first maps that displayed basalt formations as volcanic rocks . A possible predecessor would be Desmarest’s map of 1771, which depicted nothing but basalt formations; it was, however, only a regional map (see exhibit item 19). Omalius d’Halloy’s map of France and west Gemany, aside from being a beautiful example of geological cartography, gave special attention to "basaltic terrains" that are "the products of actual volcanoes". These basalt terrains are indicated by small red spots, and they are concentrated in two areas: the Auvergne/Vivarais region of south-eastern France, and the regions known as the Eifel and the Westerwald, along the Rhine between Koblenz and Cologne. The exhibition displays the complete map; for the catalog we reproduce a detail showing the Rhineland basalt.

Surprisingly (since large colored, engraved maps were quite expensive to publish), the map was re-engraved with English text for Henry De la Beche, Selection of geological memoirs contained in the Annales des Mines (London, 1836), which is in the Library collections but is not included in this exhibit.