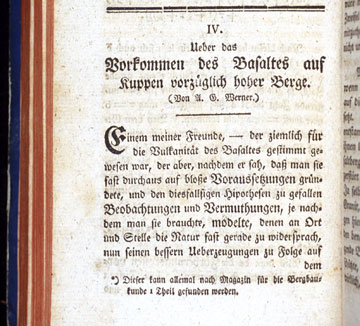 There might not have been a controversy over the volcanic origin of basalt were it not for Abraham Werner. Werner was a professor at the mining academy at Freiberg in Saxony, and a well-respected mineralogist. He was also a superb teacher, and his students staffed most of the major universities and courts of Europe. Werner was a neptunist, meaning he believed that all of the earth’s rocks were deposited from water. This included basalt. In Saxony, basalt formations are often sandwiched between layers of limestone and other stratified rocks, and Werner thought it unlikely that a volcanic rock could lie between layers of sedimentary rock. Werner also believed that volcanoes were unimportant in shaping the earth’s surface. His views were taken up by his many students and the result was the so-called "neptunist-vulcanist" controversy that pre-occupied geologists at the end of the eighteenth century.