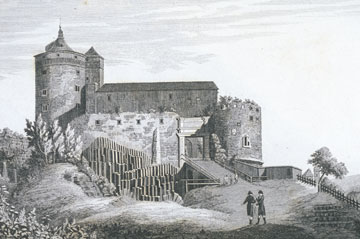 Scipione Breislak, whose map of the Vesuvius region we have already seen (exhibit item 12), went on to publish a number of important surveys of geological thought in the early nineteenth century. One of these, his Geological Institutions, contained an atlas of plates, and many of the illustrations show columnar basalt formations. The plate on display depicts a basalt formation at Stolpen in Saxony, upon which a castle had been built. Since columnar basalt was linked to volcanoes in southern France and eastern Germany, some geologists argued that the Stolpen formation also had a volcanic origin. Abraham Werner, however, visited Stolpen (one of the two basalt formations he sought out), and declared that the basalt was clearly sedimentary in origin, and that there was no evidence at all of volcanism in the area.