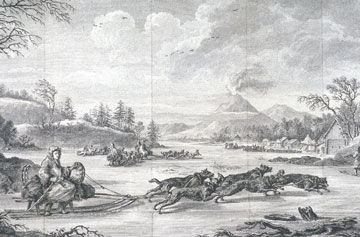 In 1788 Barthelemy de Lesseps was disembarked on the Kamchatka penisula by Commander La Perouse, then in the middle of a round-the-world voyage. Lesseps’ task was to take the ship’s journal overland back to France, in the event that something happened to the ships. It was a fortuitous precaution, since the vessels, and La Perouse, disappeared shortly thereafter.

In making his way along Kamchatka, Lesseps observed a number of active volcanoes. The plate displayed probably is intended to show Lesseps himself, on a dog sled, and there is a volcano actively erupting in the background. Lesseps did not identify the volcano in the illustration, but it was probably Tolbachik, which he mentions later in the text by name.

For a map that shows the volcanoes of Kamchatka, including Tobalchik, see exhibit item 41.