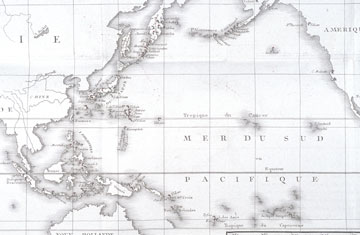 The world-wide extent of volcanism was brought graphically to life in this map published in 1802. It purports to show all the active volcanoes in the world, and it is astonishing how many were known by this time, when you consider that fifty years earlier, the map could have been confined to Europe. Numerous volcanoes are shown in Kamchatka, in Japan, in Java and Sumatra and other islands of Malaysia. The volcanoes of Ecuador and Peru are shown in abundance, as are those of Mexico, which were explored by Humboldt. Many of the volcanic islands of the Atlantic and Pacific are represented, such as Tenerife in the Canaries and the isle of Bourbon (now Reunion) off Madagascar

The illustration above shows the portion of the map that depicts the Pacific ocean. A further detail below shows the Kamchatka penisula, which was visited and mapped by Lesseps in 1789 (see exhibit item 39). 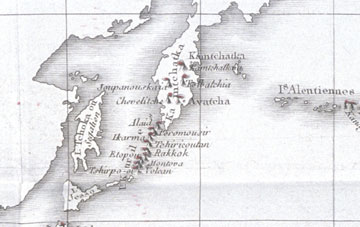