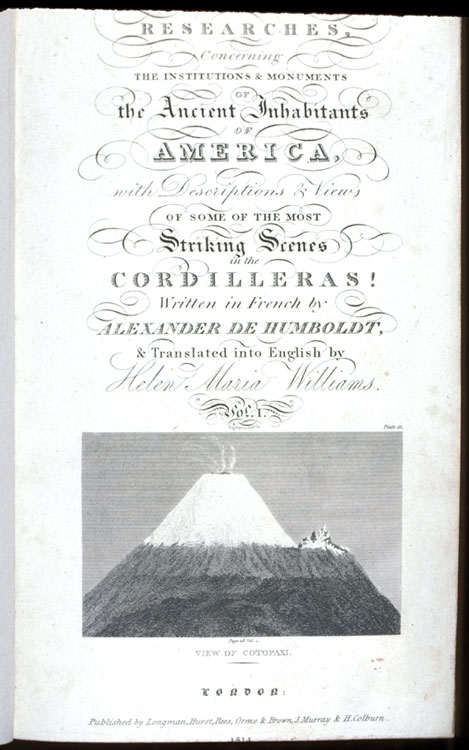 Alexander von Humboldt spent five years in South America, from 1799 to 1804. In addition to navigating the length of the Orinoco River, he managed to find time to travel through Ecuador and Peru, investigate the hieroglyphics of the Maya, and meet with President Jefferson of the United States. While in Ecuador, he encountered the same volcanic mountains that had intrigued La Condamine sixty years before. He climbed almost to the top of Chimborazo, an extinct volcano that towers above 20,000 feet, and witnessed (by ear) a catastrophic eruption of Cotopaxi in 1803. For the English translation of his Researches, he put a charming engraved vignette of Cotopaxi on the title page.

Many geologists thought that volcanic eruptions were the result of water from the sea percolating into underchamber chambers of hot rock. Humboldt remarked that it was interesting that the western range of the Cordilleras, which were closest to the Pacific, had not erupted in human history, while the eastern range, furthest from the sea, contained all the active volcanoes, including Cotopaxi.

Humboldt also viewed the volcano at Jorullo in Mexico, which was still smoking when he got there, although it had last erupted in 1759. We have used his engraving of the site to illustrate the introduction to this section (see Volcanoes Around the World).