Section XII. Volcanoes Around the World 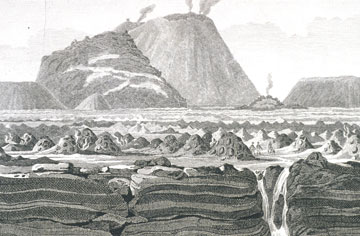 Up until 1750, Europeans were familiar only with the volcanoes of Italy and the Mediterranean. There had been occasional reports published about eruptions in the Moluccas, and Iceland, but European geologists had little first-hand experience with such occurrences. The situation changed rapidly in the last half of the eighteenth century, when a number of observers sent back detailed accounts of volcanic eruptions in lands overseas.

The illustration shows the volcano at Jorullo in Mexico that erupted in 1759, still steaming forty years later (see exhibit item 40).