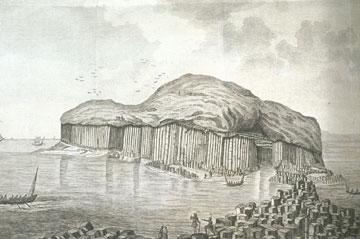 We have already seen one work by Faujas-de-St.-Fond, who visited the Velay and Vivarais regions of France and recorded many of the basalt formations there (see exhibit item 20). In 1784 Faujas visited Scotland, and he made a special effort to see Staffa and Fingal’s Cave, which Banks had described so dramatically. Faujas-de-St.-Fond’s account of his geological adventure was not published until thirteen years later, because of the French Revolution and the war. Fortunately, when he did come to publish, he did not need to provide his own illustrations, since Banks and Pennant had taken care of that. All of the earlier engravings from Pennant’s book are here recopied and reprinted. We see here the island of Staffa as if appears when sailing out from Mull.