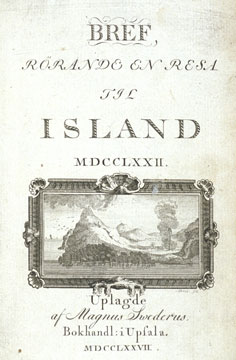 Since Joseph Banks provided the illustrations of Staffa for both Thomas Pennant and Faujas-de-St.-Fond, one might wonder if he ever got to publish his own account, with his own images. The answer is, yes and no. Banks never did publish his own narrative. But on his expedition to Iceland he was accompanied by Uno von Troil of Sweden, and in 1777 Troil published his own description of the journey. When it came to Staffa and Fingal’s Cave, Troil used both Banks’ text and his pictures. However, the engravings produced rather poor impressions, and they are not nearly as striking as the prints in Pennant or Faujas-de-St.-Fond.

So instead of displaying a plate of the Hebrides, we show the titlepage, which contains a charming engraved vignette of Mt. Hekla, the dominant volcano of Iceland. Hekla had long been known to Europeans, but Banks and Troil were the first to subject it to scientific scrutiny and bring back samples of its lava for study.

To reload this page with a detail of the title-page engraved vignette, click here.