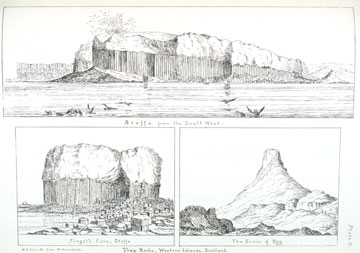 Henry de la Beche compiled his Sections and Views to "induce geologists to present us with sections more conformable to nature than is usually done." He was a gifted draftsman, and he believed that a simple pencil sketch could convey more useful information than an elaborate engraving. For this plate, he began with MacCulloch’s engravings of Staffa, Fingal’s Cave, and the Scuir of Egg (see exhibit item 50), and reduced them to what he considered their essential elements. The resulting lithograph does have a certain simple clarity and charm.

Other plates in this work show the crater of Vesuvius, the volcanic cones of Auvergne, and a detailed section of the northern coast of Ireland, which includes the Giant’s Causeway. On the section, and on several other plates of trap (basalt) formations, the trap or basalt is hand colored a soft green. This continues a tradition that we saw in Conybeare’s map (see exhibit item 51), and the same color scheme is later echoed in the illustrations of Cunningham (see exhibit item 55), where the whinstone (basalt) is tinted a nearly identical shade of green.