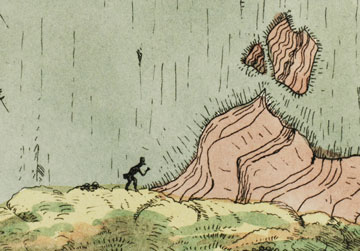 When Desmarest argued for the volcanic origin of basalt, his arguments were based on geological mapping. He identified extinct volcanic craters, followed the lava trail from such craters, and arrived at columnar basalt. It was a matter of proximity. When Whitehurst claimed that toadstone was volcanic, he based his argument on the similarity between toadstone and basalt. It was a matter of resemblance. But the neptunists resisted both arguments, claiming that molten rock, when cooled, always formed a vitreous or glass-like structure, and never a crystalline structure like basalt. This suggested the possibility of resolving the question by experiment in the laboratory, to see if a basalt-like structure could be produced by cooling molten rock in a crucible. The object of the first experiments was whinstone, the Scottish word for what we call basalt.

The illustration to this section shows a geologist at work on what would later be called "Hutton’s section" at Salisbury Crags; it is a detail of a hand-colored engraving in exhibit item 55