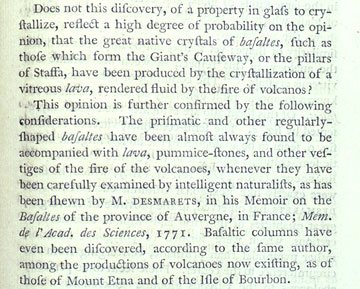 James Keir was not a geologist but a well-known chemist, who moved in an intellectual circle known as the Lunar Society that included James Watt and Matthew Boulton, of steam-engine fame, and Josiah Wedgwood, the maker of porcelain. In experiments with molten glass, Keir discovered that if glass were cooled very slowly, it did not assume a glassy structure, but instead became crystalline, very much like fine-grained basalt. In this paper of 1776, he suggested that perhaps he had discovered evidence that basalt was an igneous rock, and then made a remarkable intellectual leap, by suggesting that the basalt of the Giant’s Causeway was the product of a volcano.