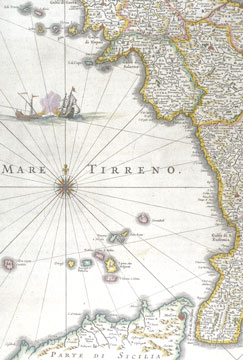 Vesuvius and Etna were not the only two active volcanoes known to Europeans. The Aeolian Islands, also known as the Lipari Islands, lie just north of Sicily, and the islands include two volcanoes, Stromboli and Vulcano, that erupt on a smaller scale. Stromboli and Vulcano were attractive to tourists, since they could be best viewed by boat and required no climbing to appreciate. Vulcano was of particular interest because, in Roman mythology, it was the home of the god Vulcan, and it was commonly known as "Vulcan’s Forge". When interest in the causes of volcanoes was aroused by the Vesuvius eruptions of the 1760s, it occurred to several investigators that study of the placid Aeolian volcanoes might yield insights that were impossible to obtain from the more dangerous eruptions of Vesuvius

The illustration, a detail of a seventeenth-century map of the southern Italy and Sicity, shows the Aeolian islands between Sicily and the elaborste compass rose. The map is in Joannes Blaeu, Atlas Major (Amsterdam, 1662); this work was not on display in the exhibition and is not included in the online catalog.

Click on the map to see a detail of just the Aeolian Islands.