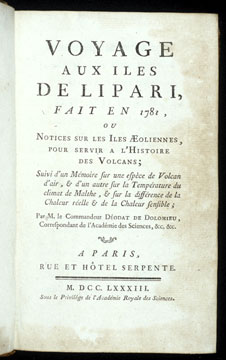 The first student of volcanoes to visit the Aeolian Islands was Guillaume-Antoine Deluc, who landed on Vulcano in 1757 and actually climbed inside the crater. However, his account was not published until 1780, and then it was buried in a multi-volume book by his brother Jean Andre, and received little attention. Sir William Hamilton sailed by the islands in 1768, but never made a first-hand inspection. So the honor of being the first to study in detail the volcanoes of the Aeolian Islands goes to Deodat de Dolomieu, who examined both Vulcano and Stromboli in 1781 and then published this book-length account. His book is not illustrated.

Dolomieu believed that volcanoes had played a role in shaping parts of the earth’s surface, but for him volcanism was a minor force compared to water in shaping and depositing rock formations. Spallanzani (see exhibit item 26) was greatly influenced by Dolomieu and quoted from him extensively