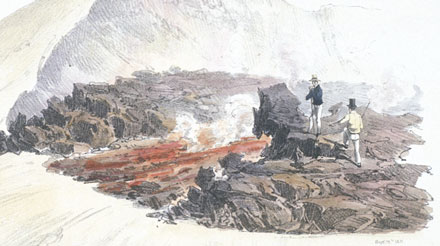 By 1830 it was well understood by most geologists that volcanoes were an important world-wide phenomenon, that the study of volcanoes could yield important insights into earth history, that basalt and whinstone were igneous rocks, that formations such as the Giant’s Causeway and Fingal’s Cave were the products of volcanoes, and that, to account for such formations, the earth must be very, very old.

But volcanoes did not lose their interest for geologists. They continued to erupt, and observers continued to travel to witness these eruptions. So, as a point of transition for some future exhibit, perhaps on "Volcanoes and the Idea of the Earth’s Central Heat", we offer up two final volcano publications. One revisits the grandfather of volcanoes, Vesuvius, and the other visits a new volcano that sprang out of the Mediterranean.

The illustration, showing lava streaming from the crater of Vesuvius, is from exhibit item 65.