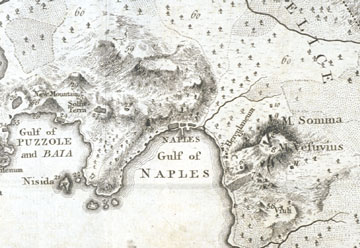 Vesuvius and Etna were not the only sites of volcanic activity in early modern Europe. Just to the west of Naples is a large complex of craters and fumaroles known as the Campi Phlegrei, or Phlegraean Fields. In 1538 a new volcanic cinder cone had arisen in the area practically overnight, and although Monte Nuovo, as it was called, never erupted again, it stood as a mute reminder of the volcanic potential just below the surface.

The term Phlegrean Fields does not usually include Vesuvius, which lies to the east of Naples, but most observers rightly concluded that both sites were the result of the same geological forces. It is therefore not surprising that when Sir William Hamilton in 1776 published a collection of all his papers on Vesuvius, he called the resulting work: Campi Phlegrei.

The illustration for this section is a detail of a map of the Naples area that appeared in William Hamilton, Observations on Mount Vesuvius (London, 1772; work not on display). Monte Nuovo (New Mountain) and Solfatara (Solfre Terra) are labelled just north of the Gulf of Pozzuoli. Herculaneum, identified just to the west of Vesuvius, had only recently been excavated when this map was made.