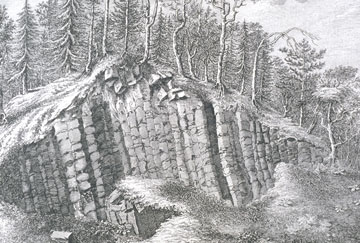 The theory of the volcanic origin of basalt was fairly widespread in France and Italy in the late eighteenth century, and even in Western Germany. But it ran into some trouble in eastern Germany, especially in Saxony. One difficulty was presented by the basalt deposits in Saxony, which frequently lie in horizonal beds between sedimentary strata, or as caps on the top of isolated rises. With no volcanic cones in evidence, it is more difficult to argue for an igneous origin for basalt. A second problem was presented by the foremost geological authority in Saxony at that time, Abraham Werner. Werner came to champion an aqueous origin for basalt, and he influenced many others who followed his lead.

The illustration, showing a basalt outcrop in Saxony, is from exhibit item 34.