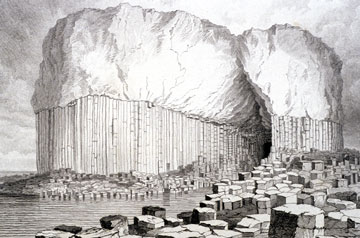 Vulcan’s Forge was the ancient name given to the eruptive island of Vulcano, just north of Sicily, where the Roman God Vulcan purportedly made his home. Vulcano lies between Vesuvius and Etna, which were the major active volcanoes known to Europeans in early modern times.

Fingal’s Cave is a spectacular formation of basalt columns on the island of Staffa in the Scottish Hebrides. It is similar to the equally impressive Giant’s Causeway on the northern coast of Ireland, and to formations on a smaller scale in central France, northern Italy, and Germany.

In the seventeenth century, volcanoes and basalt were thought to be totally unrelated. Volcanoes were considered to be rare and unimportant occurrences, and basalt formations had yet to be recognized. In the early eighteenth century, volcanoes began to receive more attention, as eruptions of Etna and Vesuvius increased in frequency. And the basalt formations of the Giant’s Causeway were discovered and widely discussed. But no connection was yet seen between volcanoes and the supposedly aqueous basalt. 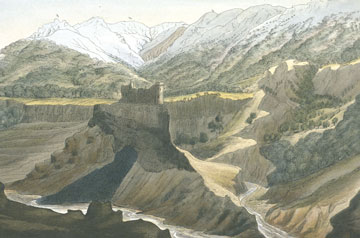 But in the 1760s and the 1770s, a small number of observers began to suspect that basalt was a volcanic rock, that its presence in an area was evidence of former volcanic activity, and that many of the mountains of Europe were extinct volcanoes. If true, this meant that vulcanism was an important force in shaping the earth’s surface. It also suggested that the deposition of such vast layers of basalt, and the erosion of the volcanoes that created them, must have required a great deal of time. The idea of a geological time scale of immense duration began to take root in the early nineteenth century, as a direct result of the realization that basalt is a volcanic rock.

We have tried to tell the story of the role of volcanoes and basalt in the discovery of geological time in a exhibition of sixty-six books and journals, spanning the period from 1650 to 1835. Books on volcanoes, and books on basalt, tend to be the most spectacular publications in all of geology, and it is a fortunate coincidence that allows them to be combined in a single exhibition to present such an important narrative.

All of the publications displayed come from the collections of the Linda Hall Library.