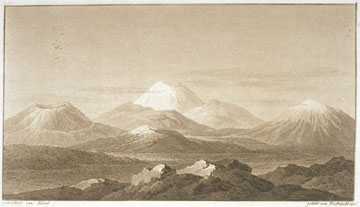 Leopold von Buch studied under Abraham Werner at Freiberg and was a confirmed neptunist, which means he accepted the aqueous origin of basalt. In 1798 he set out on an extended geological tour that would eventually include much of Germany, Switzerland, Italy, and France. One of the areas he visited was the Auvergne region of France, which Desmarest had made famous thirty years earlier (see exhibit item 19). The most striking feature of the Auvergne is the Puy de Dôme. (Blaise Pascal in 1648 had sent his brother up this mountain, barometer in hand, to demonstrate that the level of the barometer fell as the weight of the atmosphere decreased.) Von Buch observed that the Puy de Dôme was made of trachyte, which was related to basalt, and that it seemed to have a volcanic origin. But he also remained convinced that the basalt of Saxony was formed from aqueous precipitation.

The handsome sepia-toned aquatint serves as a frontispiece to volume 2 of von Buch’s Travels through Germany and Italy [and France]. It shows the puys of Pariou, Dôme, and Caceme as viewed from the Puy de la Chopine.