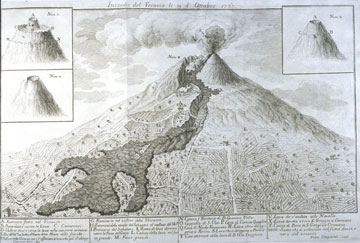 The eruption of Vesuvius of 1767 had two great witnesses, Sir William Hamilton (see exhibit item 11), and Giovanni Maria della Torre. Della Torre is of interest because he subscribed to a recent theory of volcanic action which claimed that eruptions were caused by the effervescence of pyrites, or sulphur comfounds. In 1700 the chemist Nicholas Lemery had performed a famous experiment, in which he added water to a model mountain that contained pyrites, and the result was a flaming mini-volcano. Della Torre and a number of other eighteenth-century vulcanologists found this to be an attractive explanation of volcanic action.