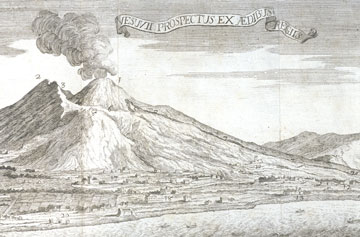 Francesco Serao (1702-1785), who wrote this description of the eruption of Vesuvius of 1737, was a professor of medicine at the University in Naples. He believed that volcanoes did not spew forth "fire and brimstone," but rather that the lava they produced consisted of sand and earth that had been melted by the volcanic fire and converted to a glass-like material. He also argued that Vesuvius had looked different in the past. In his time Vesuvius consisted of a volcanically active peak, surrounded by a half-ring called Mount Somma. Serao pointed out that if Vesuvius had always had this structure, it was difficult to explain the locations of some lava flows on the other side of Mount Somma.