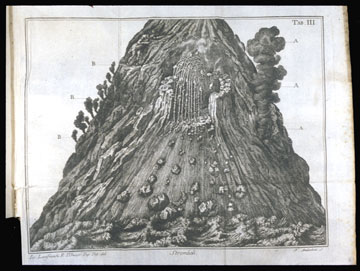 Spallanzani was a priest and professor of natural history at Pavia and is more noted for his work on infusoria and spontaneous generation than his research in geology. However, in 1788 he spent 35 days in the Aeolian islands and his investigations there brought a new dimension to volcanology. Not only did he climb into the craters of Stromboli and Vulcano, but he gathered specimens that he later subjected to high-temperature tests in his laboratory, thus giving volcanology an experimental aspect that it previously lacked. The results of his work in the Aeolian Islands and on Etna were published in his multi-volume Travels, which were so popular that they were quickly translated into French, German, and English. The French edition is also on display in this exhition (see exhibit item 27).

The plate displayed shows the island and volcano of Stromboli. It is interesting because the illustration is deliberately not to scale, allowing us to view Spallanzani observing from up above, the ejection of small stones or lapilli, , the lava flowing into the sea, the smoke from a cave on the east flank, and various fumaroles.