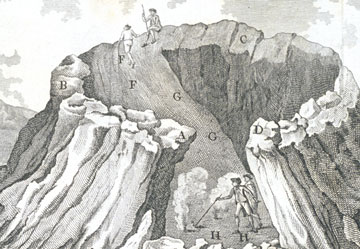 Spallanzani actually descended into the crater of Vulcano and gathered samples for later laboratory testing. He noted some columnar basalt attached to the inner sides of the crater, which would seem to confirm the theory of the volcanic origin of basalt. Spallanzini believed that volcanic fire was caused by the ignition of underground sulfur, and he thought that all of the Aeolian Islands arose from the sea at about the same time.

This French edition of Spallanzani’s Travels appeared seven years after the original Italian edition; it is of interest that most of the engravings have been redone. For example, the detail of the view of Vulcano that we reproduce has quite a few more people than the illustration in the first edition, and shows the summit from a slightly different vantage point. The Library also holds the English edition of the Travels, which was published in 1798.