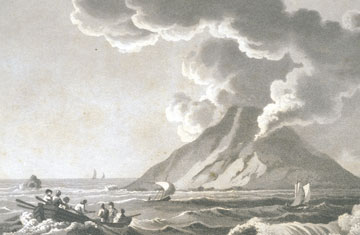 The island and volcano of Stromboli, part of the Aeolian Isles, is notable because of its distinctive style of activity: it is in a state of almost continuous mild activity, but it never erupts explosively, which has always made it a magnet for tourists. Spallanzani produced a dramatic engraving of Stromboli in his 1792 Travels (see exhibit item 26), but others have also recorded visual impressions, and one of the most memorable is this illustration provided by George Russell in an account of his travels. Russell, an Englishman who toured Sicily in 1815, noted that Stromboli erupted about every seven minutes, sending stones high into the air. When viewed at night, the stones glowed a bright red and gave the appearance of fireworks.