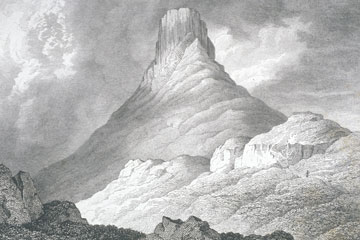 John MacCulloch’s Description of the Western Islands is a classic of geological literature and contains descriptions of all of the basalt formations of the Hebrides (as well as many other kinds of rock formations). The book contains illustrations of Staffa and Fingal’s Cave, as one might expect (MacCulloch’s view of Fingal’s cave is used to illustrate the Introduction to this exhibition). But it also includes engravings of a number of formations that had seldom before appeared in print. One of the most striking of these is the Scuir of Egg (now Eigg). This is a long ridge of columnar rock that towers above the entire island. The Scuir is not basalt, but rather pitchstone, which is now known to be a volcanic rock.